Once all of the invited guests had been assembled and accounted for, Carl’s attorney – the one in charge of his personal dealings, not his criminal defense, and thus not nearly as well-known – began to read.

“I, Carl Hutchins, being of sound mind and body.”

Donna looked over at Matt and rolled her eyes. He smiled briefly, then stifled it and sternly shook his head, nudging his chin to indicate Rachel sitting at the head of their gathering, dressed in black, eyes darting amongst the presumed beneficiaries, glaring at anyone who looked like they might be preparing to disrespect the solemn occasion in any way. Considering Grant, Lorna, Jamie and Amanda – in addition to Donna – were in attendance, the odds seemed rather good of it happening.

Very few surprises. The bulk of Carl’s estate, or what was left of it, anyway, after the Justice Department had finished seizing absolutely anything that might have been acquired via unlawful means, went to Rachel, with trust funds for Cory, Elizabeth and Lori Ann that all three could claim upon their respective twenty-fifth birthdays. He also left a substantial donation to the Bay City Modern Art Museum in Chase Hamilton’s name, with the provision that the funds be used at Douglas Rivera’s discretion. “I hope,” Carl wrote, “That Mr. Rivera accepts my gift in the spirit it was intended.”

The fact that Doug wasn’t even there suggested that Mr. Rivera, perhaps, was still feeling a bit of ambiguity about taking money from the man who’d gotten Doug’s partner killed.

Carl’s lawyer went on, “Mr. Hutchins also left letters for each of you.”

He distributed them expressionlessly. As if he had no idea what was inside the thick, cream-colored envelopes with their names neatly written in calligraphy on the front.

Or what the fall-out would be.

To my darling Elizabeth –

Would it be foolish of me to believe that, of all my mourners, you are the most heart-broken and sincere? While I harbor no reservations regarding your mother’s devotion, the fact of the matter remains that I am only one of the husbands she has lost to date,

whereas you shall never have another father.

You are my solitary hope, Elizabeth. The only one I can count on to nurture the flame of my legacy and ensure it continuing on after I am gone. If the respectable Hutchins name is to remain vibrant, if we are to, once again, assume that place of honor which was taken from us by the petty, malicious, narrow-minded bureaucrats intent on my persecution and ultimate destruction, it will be through your efforts and commitment.

I go to my grave confident my faith has not been misplaced.

I go to my grave confident solely in you.

From the time you were a mere babe in arms, you have judged me. Perhaps that is why, upon first laying eyes on your newborn form, I believed I spied something of your late, lost brother, Ryan; for Ryan was perennially judging me, as well. He, however, was able to make the rectification into forgiveness, and I am confident that, had he lived, we would have only progressed in the establishment of our unbreakable, biological bond.

In your case, alas, it is I who must take my leave and abandon the tattered fragments of our relationship prior to reconciliation.

I do not want you to blame yourself, son. I know that when my own father chose to end his life, I vowed that I would spend the remainder of my days, if called upon, to bring those who’d driven him to it, to justice. I blamed myself for not having recognized his howling grief earlier and embarked on my campaign to ameliorate the affliction before it proved too late. I have no desire that you should suffer similarly.

Having once stood in your shoes, I stress that you must not feel accountable for my actions. I did what I felt it essential to do. No action on your part would have proven capable of dissuading me from my course, even if you had felt moved to do so.

My record as a father has proven tragically dismal. Perry. Ryan. Jenna. Elizabeth. You. I failed you all in one way or another. My sole hope for the future is that you might do better with your own son.

First, my humble and deepest thanks for the heroic work you are doing in the surrogate parenting of my only grandchild, Lori Ann.

Despite the affection I feel for my flesh and blood, and the unmistakable traces of proud Hutchins lineage that I glimpse in her, I confess that I fear I, myself, may not have proven up to the task of dealing with a child of her limitations. How serendipitous for her then, that Lori Ann ended up in a home where accomplishment and erudition take a backseat to other, less intellectual pursuits.

It is, however, my concern that in such a casual environment, Lori Ann’s physical safety may be overlooked. She is, at the end of the day, my grandchild, a Hutchins, an extension of myself. If the past several years have taught us anything, it is that there are those who will stop at nothing to bring about my downfall. My death, I fear, will do little to restrain the bloodhounds and keep them at bay.

As I do not wish for our Lori Ann to become collateral damage at the hands of such conscious-less scoundrels, I feel obliged to leave you with a warning. It has come to my attention that you have been investigating one Eduardo Rivera.

Attached to this missive, I have included several documents that should help you along your journey of proving that he is not precisely who he says he is, and that his motives for certain seemingly benevolent actions are far from what he claims publicly.

As Lori Ann’s grandfather, it is the least I can do to secure her future.

Do forgive me for being blunt but, during our multi-year acquaintance, I have suspected you of being more and better of a child to Rachel then her own grown off-spring, and thus I feel I can speak to you plainly, in a manner and parlance I wouldn’t dare employ with the others.

Take care of our Rachel. Look out for her, and shelter her from inevitable, putrid bile bound to spill forth from the good people of Bay City who have been waiting hungrily for the chance to dance upon my grave and resurrect sins long dead, buried and forgotten. You, alone, posses a capacity to understand and forgive that shares no equal. I beseech you to extend that largess towards Rachel now.

I believe you are capable of seeing the hero in even the worst villain. How else could you have given your heart to Grant Harrison? For if you insist there is goodness to be found in even that dark, rotting soul, then, I confess, I am prompted to believe it myself.

Perhaps you might feel inclined to work your similar magic on Jamie, Amanda and Matt, as well, for they – and Rachel – certainly deserve it.

Would you believe it brings me joy merely imagining the ecstasy you must be feeling upon the occasion of my demise?

Surely, this is a day you have been waiting for lo these many decades, and have felt cruelly betrayed each time it proved to be a false alarm.

I brought it upon myself, of course. What else should I have expected, marrying a woman whose heart always was – and always would be – with her first love, her first lover. No matter how I labored to make you happy, and no matter the multiple protestations of happiness you made while lying in my arms and elsewhere, I always knew your true heart resided with Michael, and always would, no matter what man might come along to turn your head for a stray moment or two.

have recently become privy to.

Michael, my dear, is alive. His death was fabricated as a result of his work with the same government agency which once brought so much turmoil into your lives, but the key fact is that he is, in fact, alive, and that I have included instructions for how to find him.

So, rejoice, Bella! No longer will you be compelled to pine for the man you never could stop loving. Michael is alive. Take that knowledge as my final gift – and expiation – to you.

What is it that you want more than anything in the world, Amanda?

Would you allow me to hazard a guess?

Cory Publishing. There is nothing more important to you than that. Alas, Iris’ machinations have made sole possession impossible.

Over the past several weeks, Iris became desperate to raise a large amount of money. In order to do so, she was forced to surreptitiously sell the Cory stock she had worked so hard – and so criminally – to acquire several years ago. Through a well-connected and discrete intermediary, I bought it all.

And now I am bequeathing it to you.

Consider it my apology for the inadvertent role I may have played in your father’s death when I first arrived in Bay City, and for any other misunderstandings that have arisen between us since then.

The stock is yours to do with as you see fit. I could not give it to your mother, as that would only, once again, bring the self-appointed guardians of middle-class values in the Justice Department down upon her head, and that is the last thing I would wish for her at this time.

However, while I know I am in no position – moral or otherwise – to make this request, I shall do it anyway: Allow your mother back into your company, and, consequently, into

your heart, as well. She misses you desperately, and this is my attempt at courting reconciliation.

I foresee you shall find it a rewarding experience for you both, but I leave it to your discretion.

Have I ever properly thanked you? Truly, as I look back upon my life, I recall all the things you have opened my eyes to, all the fresh perspectives you have given me, and I am shamed to think I never expressed adequate gratitude for any of it.

It is the same with my death. Previous to your coming to speak with me in prison, I was certain that I knew what it meant to love my wife with all my heart and soul. But you made me see I was living in a fool’s paradise. I believed that what Rachel needed was me with her. When, in reality, what she needed was me removed from the equation, so that she might find true happiness in the realm I was heretofore keeping her from – her children.

Rachel needs Jamie, Amanda and Matt in order to be whole. And I was the one selfishly keeping her from acquiring her heart’s desire.

You were right, and I was wrong. The only way to express my undying love for Rachel was to allow her to reunite with her children. And the only way to accomplish that was to cease being the impediment to their reconciliation.

Thank you, Lorna. Thank you for, at long last, pointing me in the correct direction, even if it did lead me away from the love of my life.

I have finally done the right thing. All because of you.

Do not fret, my dear. I have taken care of everything.

Until we meet again –

That you for voting! Come back next week to see the results. 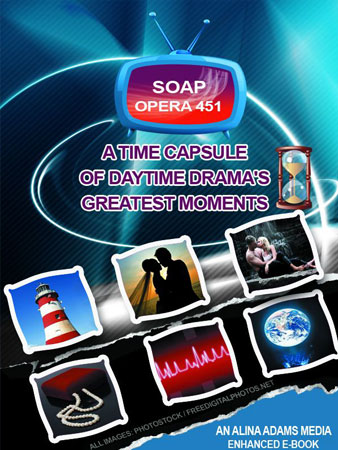